Every year Tokyo Metro announces a new series of posters reminding their customers to ride the subway in a courteous way. These eye-catching “Manner Posters” have been produced continuously since 1974, and are world renowned for the ever inventive ways in which they remind us all to be considerate towards our fellow passengers. Each year has a single theme with one new design for each month, and these are posted liberally throughout Tokyo Metro stations and trains. This year’s series of posters have just been announced and they promise to be very educational, as the all new theme is “kanji”. 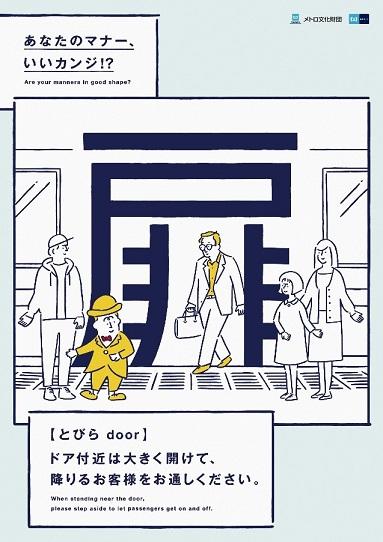 Kanji, of course are the Chinese characters that are used to write the Japanese language. Each new poster will center on a single kanji character for immediate visual impact, and around that will be a graphic illustration and explanatory text. Tokyo Metro have stated that they chose the kanji theme because even from a distance, the single character will grab people’s attention and immediately convey the essential message. They also want to arouse the interest of overseas visitors with these posters, and so the text is written in English as well as Japanese.

The new posters designed by Tokyo illustrator, Yu Nagaba, will feature a new character called “Chikao-kun” or “Underground Boy”. In the first poster we can see him politely stepping aside to let another passenger off the train. The new slogan “anata no mana- , ii kanji?” or “are your manners in good shape?” is a pun on the meaning of “kanji” which can signify both a “character” or a “feeling” in Japanese.

Kanji characters are notoriously difficult both to learn and to remember, so these new posters are great news for language learners. If we look at the first poster for example, we can see that the kanji of the month is 扉 or “tobira,” which means door. Not only does the English text explain the meaning of “tobira,” but the composition cleverly reflects that meaning in the way that the kanji 扉 is actually used as a door. Certainly these posters will help to make written Japanese a little more memorable.

The new “kanji” series of manner posters will be released throughout Tokyo Metro this April and will continue until March of 2017. 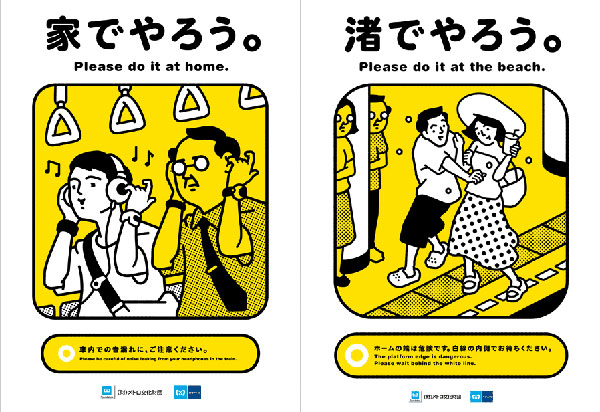