A series of fruit and vegetable themed manner posters on Japan’s Tsukuba Express (TX) Line is providing passengers with humorous lessons in correct onboard etiquette. Since 2016 a different poster has been released each month on the line that runs between Akihabara in Tokyo and Tsukuba in Ibaraki Prefecture.

Each poster combines the name of a different fruit or vegetable with comical examples of good and bad passenger behavior, and passengers have been delighted with the inventive play on words. For Japanese language-learners these posters also provide lessons in the Japanese love of wordplay. Called dajare, these jokes are similar to puns, and are the equivalent of “dad jokes” in English. 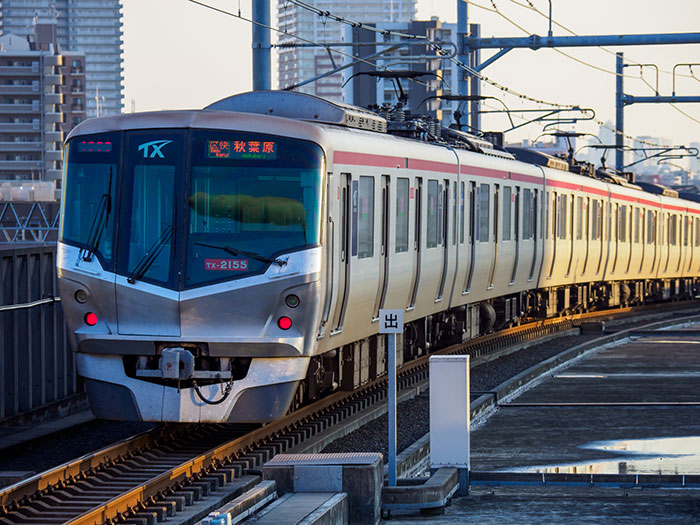 The Tsukuba Express runs between Akihabara and Tsukuba

The title of the original poster series, meiwakudamono, is itself a grafting of the Japanese word meiwaku (meaning nuisance) onto the word kudamono (meaning fruits). Each of the “nuisance fruits” posters depicts a cute but badly-behaved fruit caught in the act of annoying other passengers. To underline the point, at the top of each poster the word oishii! (meaning “delicious!”) has been corrected to oshii! (meaning “disappointing!”). Let’s take a look at some examples. 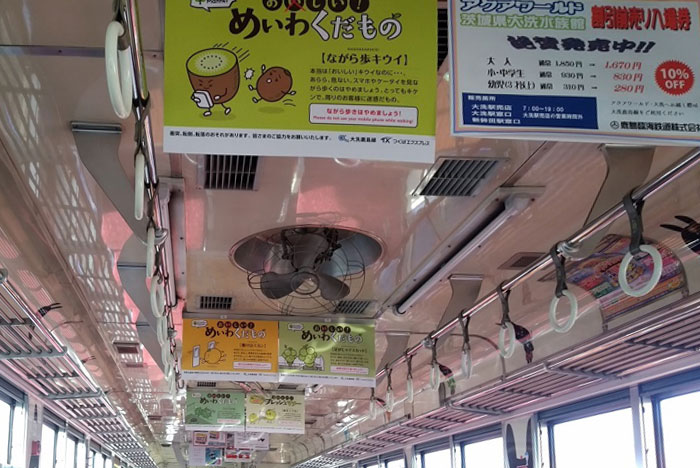 The TX manner posters have proved very popular with passengers

Our first example features an extremely inconsiderate pear taking up far too much space with its bag placed on the seat and its legs spread wide. The Japanese for “pear” is nashi, but this poster is titled okamainashi meaning “careless”. This is a very careless pear. 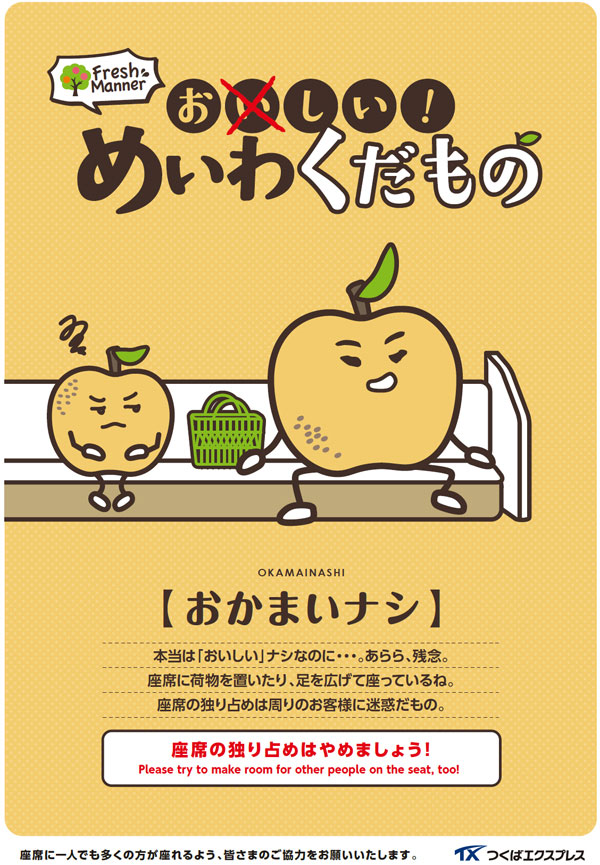 The next poster features two inattentive raspberries. One raspberry is using its smartphone while walking, and another raspberry is running for its train. Clearly they are about to collide at the next corner. The title “masshigurazuberi” combines the Japanese for “raspberry” with the word masshigura which means “headlong rush”. It’s a bad idea to be a rushing raspberry. 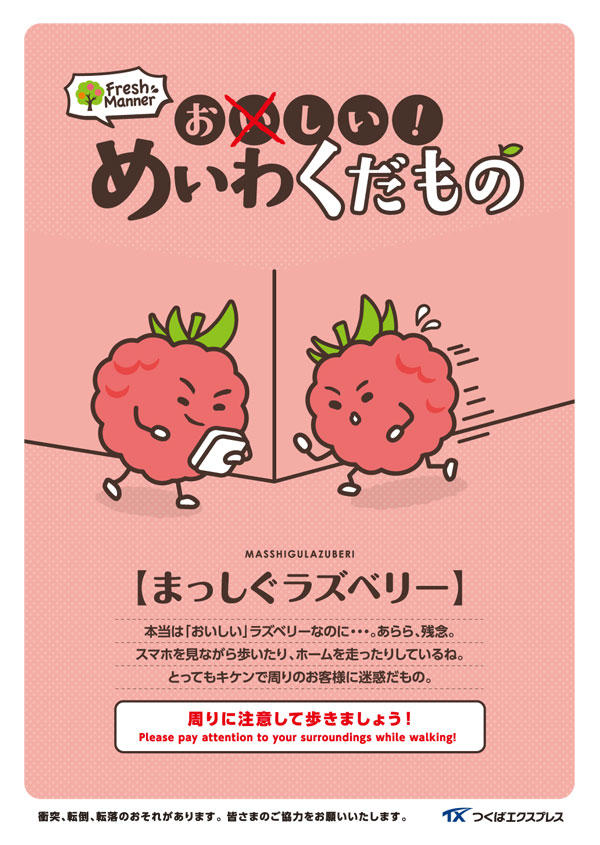 Below we see two badly behaved blueberries kicking the train doors and swinging from the hand straps. Here the Japanese for blueberry is combined with the word araburu meaning “wild” and “unruly”. These are truly unruly blueberries. 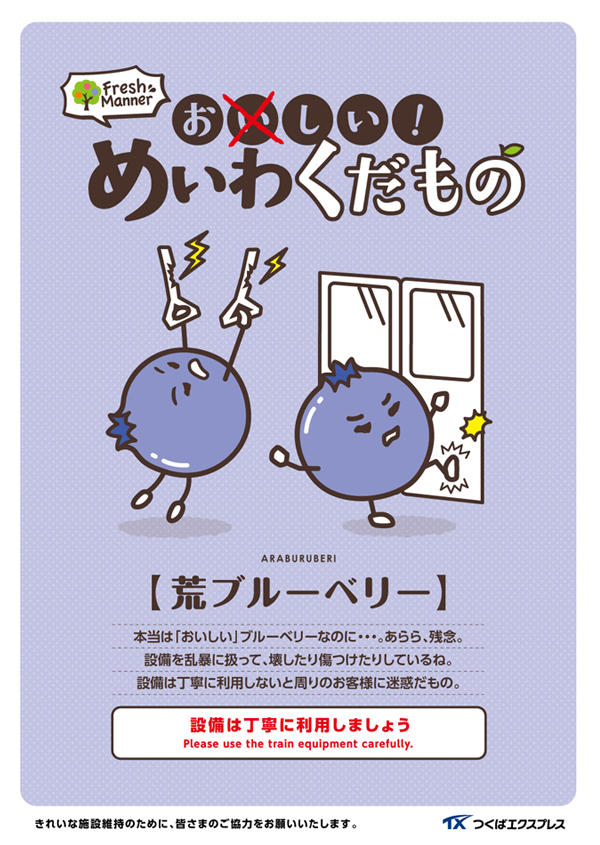 Below we see a durian fruit parking itself solidly in front of the train doors making it hard for other passengers to get in and out. The title doamaejindorian combines the name of the fruit (dorian in Japanese) with the words doa mae jindori which literally means setting up camp in front of the door. Clearly this door-blocking durian has a very bad attitude. 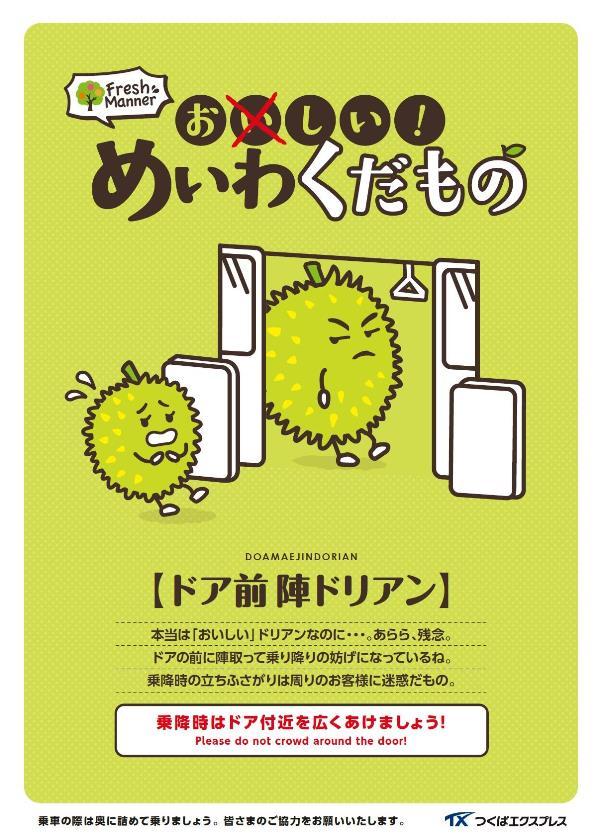 This year Tsukuba Express have followed up the awful antics of these nuisance fruits with a poster campaign of yasashii yasai or “gentle vegetables”. Each poster features positive examples of vegetables behaving with kind consideration. The ryukkuwamae-ninjin for example combines ninjin (carrot) with ryukku wa mae ni or “backpack in front”. Carrying your backpack in front means you won’t carelessly bash other passengers. 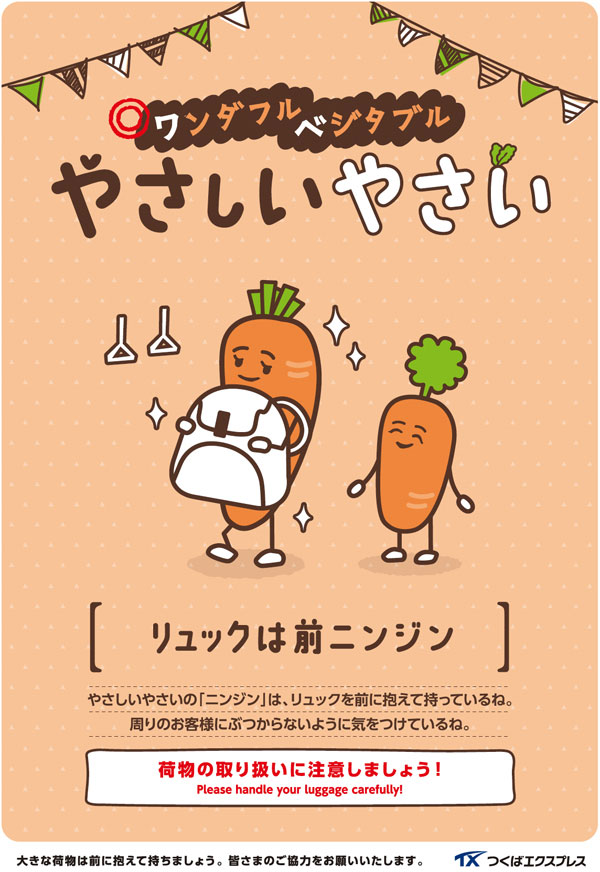 The butsukaranaingen is a bean (ingen) which is not bumping into (butsukaranai) other beans who are featured carelessly walking with their smartphones. 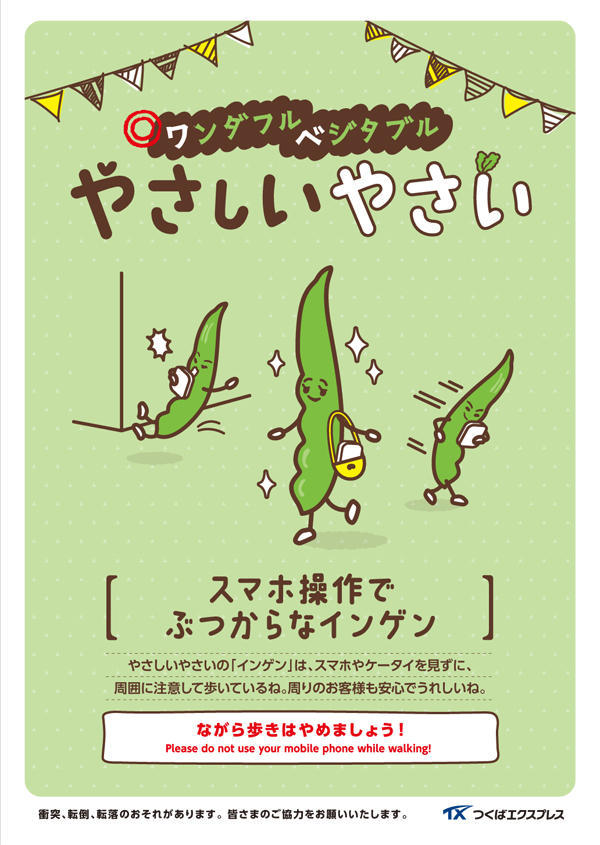 This tsugi no densha o matsutake is a matsutake mushroom who is calmly waiting (matsu) for the next train (tsugi no densha) rather than dashing madly at the closing doors. A matsutake mushroom calming waiting for the next train

This October, in order to promote this poster campaign, the Tsukuba Express Line began to operate a special “TX Vegetable Train”. The train has its own special nameplate, is hung throughout with “gentle vegetable” posters, and its floor is partly decorated with a vegetable patch design.

Images from the TX Vegetable Train

Article by Michael Lambe. Images by (1)kawamura_lucy/pixta, and Tsukuba Express. All rights reserved.