JR East have released plans to utilize wasted food from station shops as a source of biogas fuel. JR East currently have commercial complexes at or near their stations at 160 locations and are expanding shopping facilities within their station premises. Large scale food and drink retail at these facilities has led to extremely high levels of wastage. The new biogas enterprise will recycle this waste to generate energy. 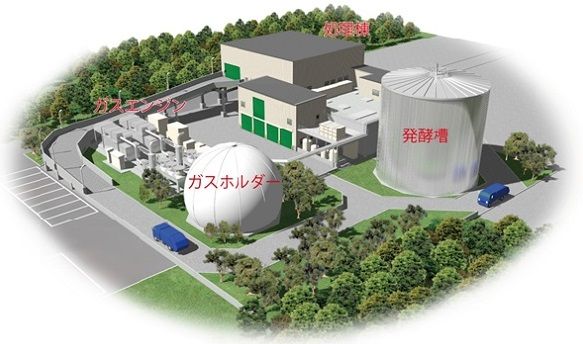 The planned biogas plant in Yokohama

JR East are working together with JFE Holdings on this project through their subsidiary JFE Kankyo Corporation and the two companies set up a new joint company, “J Bio Food Recycle” in August 2016. The plan is to build a food waste processing plant and biogas generation facility in Yokohama City, Kanagawa Prefecture.

JR East expect to collect about 80 tons of food waste each day from station buildings, shops, and bento lunch box factories. At the new plant this waste will be sorted, processed, and fermented to produce methane gas. This gas will then be used to generate power. It is estimated that the plant’s gas generator will produce enough energy to power 3,000 households.

This project is part of a general drive by JR East to save energy, reduce CO2 emissions, and promote the use of renewable energies such as solar, wind, and geothermal. In 2013 JR East set themselves an energy reduction target of 25% by 2030, and they aim to reduce CO2 emissions by 40% in the same period.

In Tokyo, empty railyards and station roofs have been employed to generate solar power, and JR East is also involved in a wind energy project off the coast of Akita. Other renewable energy projects in the northern Tohoku region are currently in the planning stages. Construction of the biogas plant in Yokohama’s coastal industrial area will commence in May of this year and it is expected to begin regular operations in August of 2018.