Lost something in Japan? You’re in luck — chances are good that you’ll get it back. Countless travelers in Japan have reported being reunited with lost valuables, including wallets with all the cash intact. You can attribute this to the overall honesty of people in Japan as well as efficient tracking systems for lost property. There are some procedures to follow, however. This article will help you navigate them to retrieve property lost on rail transport systems. 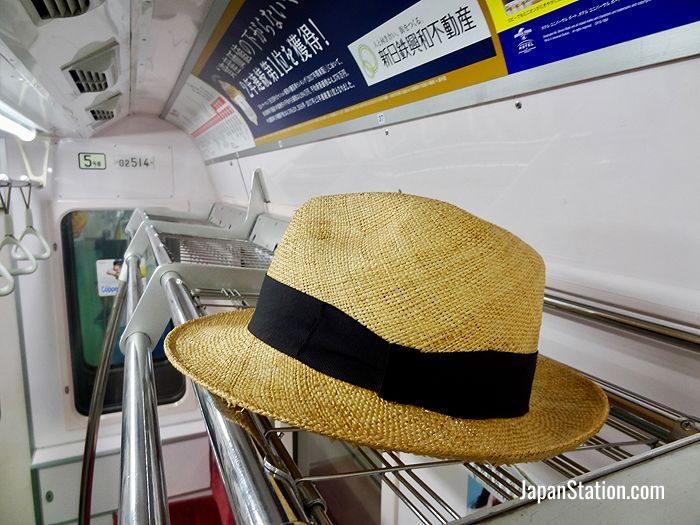 There’s a good chance you’ll be reunited with property lost on Japanese railways if you follow the required procedures.

Finding your stuff in the land of “forgotten things”

The Japanese term wasuremono (忘れ物) can be translated as “forgotten things.” English lacks a similar word, and this might reflect the care with which lost property is handled in Japan. 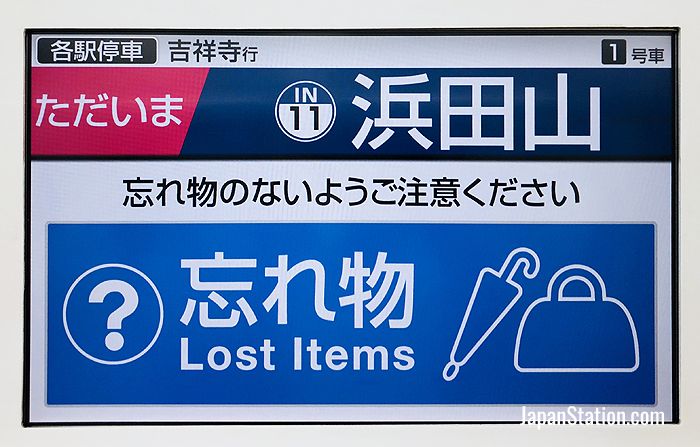 In a huge city like Tokyo, lost property is a big business. The Tokyo Metropolitan Police Department received nearly 4 million items in 2017 including 480,000 articles of clothing and 700,000 pieces of identification. With more and more travelers visiting Japan and more people carrying smartphones, lost property is increasing: the National Police Agency reported 27.96 million items in 2016, a jump from some 12.72 million in 2007. 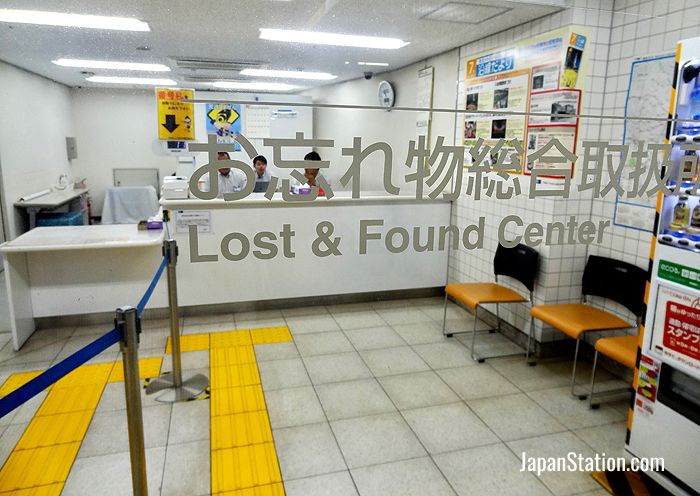 Handling all this property takes speed and efficiency. At Tokyo Metro’s Lost & Found Center in Iidabashi Station, a staff of about 50 works full-time to handle found items, return them to owners when possible, and if not transfer them to police. Every morning, staffers haul in large blue baskets full of items found throughout the company’s nine lines, 179 stations and 2,728 rail cars. 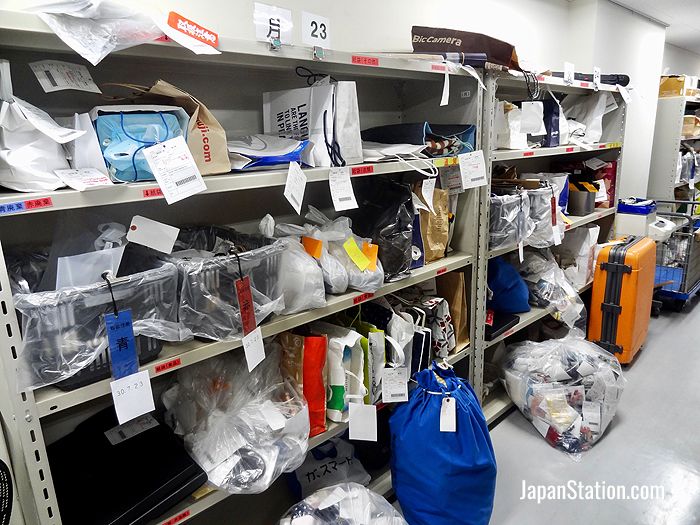 Each item gets a tag with a bar code and descriptive information such as brand name, color, and any contents. The property is quickly sorted and shelved by type: bags, clothing, eyeglasses, wallets, IDs, etc. On rainy days, the number of umbrellas surges, filling up several shelf racks, while seasonal items such as winter gloves and summer handkerchiefs are bundled into large bags for rapid processing. 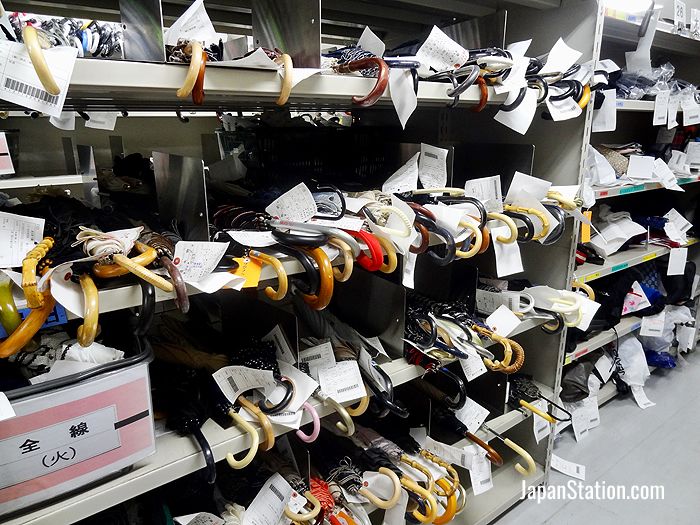 The center handles tens of thousands of umbrellas every year

Browsing the shelves, you can see omiyage (local souvenirs, often sweets, given as gifts to coworkers and family), electronics in shopping bags, thermoses and bundles of hand towels. Sometimes, unusual articles are turned in: guitars, suitcases, chairs, knives. Wallets full of cash also come in. Tokyo Metro gets to keep unclaimed cash after it’s held by police, netting the operator some 24 million yen every year. 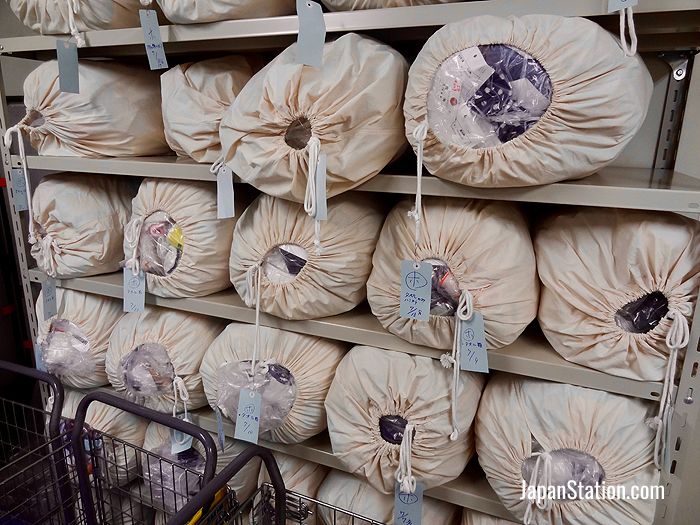 Property is stored for a day at the station where it’s found, or the terminus of the train where it was left, and it’s brought to the center the following day or the next one if it turns up late at night. Items are kept at the Lost & Found Center for roughly four days before transfer to police. There are exceptions. Of the approximately 85,000 umbrellas received every year, plastic umbrellas are kept for two weeks and then discarded. In 2017, the center received 660,302 items, an average of 1,809 items per day. Approximately 30 percent was successfully returned to owners. 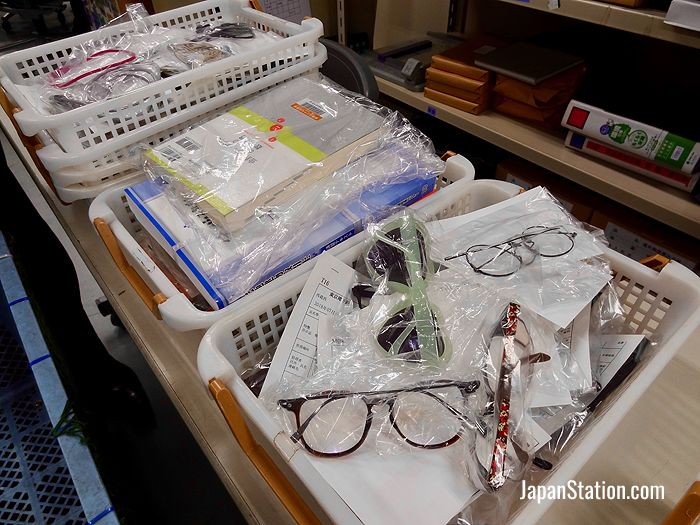 “It’s easy to forget items if you put them on overhead shelves, or if you place an umbrella on a railing,” says Toru Shimanuma of Tokyo Metro’s Lost & Found Center. “We recommend passengers keep their belongings in hand so they won’t be left behind. When it’s crowded, it’s best to put things in one’s pocket so they won’t be accidentally dropped.”

JR East, one of Japan’s largest railways, has an even bigger lost and found operation. It takes in some 2.2 million lost items annually, the most common items being clothing, umbrellas and bags; surfboards are among the odd items that have turned up. The company also has a tracking system in which items are entered into a database, tagged and held in a regional office—for instance, Ueno Station serves as the collection point for JR lines in Tokyo’s 23 wards. Since some JR lines extend to other prefectures, items forgotten on trains sometimes have to be picked up at terminus or police stations in Chiba or Yamanashi prefectures. Lost property is handed to police within a week, and about 30 percent of items are successfully returned to owners.

“We have to ensure that lost property is returned to its proper owner, and that’s why we ask customers to visit in person to confirm details,” says Harumi Motomuro of JR East’s Customer Service Quality Reformation Department. “We always ask passengers to be mindful of their belongings and to call our multilingual Info Line if they have lost something.”

What happens to property lost on rail networks in Japan?

Under Japan’s Lost Property Act, property must be handed over to police within seven days. Lost property is gathered by railway staff, tagged, cataloged and kept for a few days (at stations and centralized collection offices) and then sent to police. Generally speaking, police discard lost property three months after receiving it

How do I claim a lost item?

Report the loss as soon as possible to the appropriate railway operator, either in person or by calling (see below for contact information). You, or someone you appoint, will only have a few days to retrieve it from the operator; after that it will likely be transferred to police where it will be kept for three months.

After an item is found, how soon is it transferred to the lost and found office?

Depending on the rail operator, lost property may be sent to its lost and found office after one to three days.

How can I contact railway operators? Is it only in Japanese?

Contact them by phone or go there in person; email inquiries are generally not accepted. Some major railway companies like JR East have multilingual call centers for inquiries about lost property. However, most companies only take calls in Japanese.

How soon can I inquire about an item?

You can inquire immediately. If the item hasn’t been found or cataloged yet, you may still receive an inquiry number for the next time you call.

How long are the items kept at a lost and found office? Can this period be extended?

Items are generally kept for about three days, sometimes a few more, before they are turned over to police. At the discretion of police, some inexpensive items that are often lost, such as plastic umbrellas and handkerchiefs, may be kept for longer by railway operators. Items may be kept longer if a claim has been filed.

I’m not sure where I lost something or I’ve been told my property may have been transferred to police. What should I do?

Police are the final custodians of lost property in Japan and generally hold it for three months before disposal. There is no nationwide database for lost property and owners must apply to the police force of the prefecture where the item may have been found. If you’re not sure where you’ve lost something, go to the nearest koban (police box) or police station and fill out a lost property report (the same applies if a railway operator has transferred your property to police). You may be contacted and told to get in touch with a police lost and found center or check an online database. They include the numbers listed in the “Local Police Lost & Found” section below. Note that if you visit a police box or station in person, a phone-based translation service is often provided.

Can property be sent to another city in or outside Japan? How much does that cost?

Is lost property always at the lost and found office at the last station or the station where it was found?

No. Depending on the rail operator, lost property may be kept for a few days at the station where it was found, the final station on the line, or at a central lost and found office.

What’s the difference in what happens to items lost on a train and those lost at a station?

There is no difference. Both will be tagged, cataloged and kept for a few days before being handed over to local police.

What is the best way to find someone Japanese to contact lost and found?

If the railway operator you’re dealing with does not have English-speaking staff, ask a Japanese-speaking friend, hotel concierge, Airbnb host, or tour guide. Some of the larger tourist information centers, for instance TIC Tourist Information Center outside the Nihombashi Exit of Tokyo Station or the Kyoto Tourist Information Center on the second floor of Kyoto Station, may be able to help with phone calls in Japanese if you visit them in person.

Railway operators may ask to see your passport when you claim property. 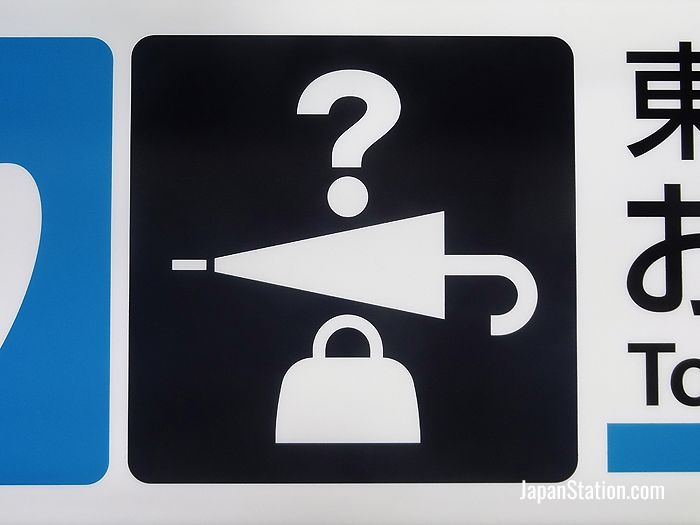 There are two counters at Tokyo Station:

JR Tokai Lost & Found
Located on the first floor on the Yaesu side, near the Central Gate for the Tokaido Shinkansen.

The lost and found office is on the north side of the Central Walkway, down a small corridor and across from the Tourist Information Center.

The counter is located outside the station on the north side. Go past Hotel Granvia and Kyoto Theater, and follow the signs for the lost and found office in an alley near bicycle parking. There’s another counter for Shinkansen passengers in the Information office on the south side of Kyoto Station. Lost & Found Office at Kyoto Station.

The office is located near the Tourist Information office at the northern end of the Central Concourse.

For more information see this page. 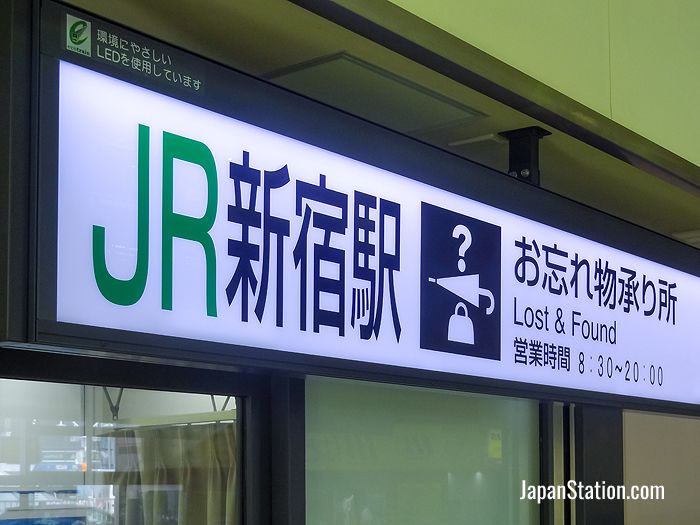 The Lost & Found counter at Shinjuku Station’s East Exit can deal with inquiries in Japanese. For inquiries in English, call the JR East InfoLine

Consult the information counter at Karasuma Oike Station. For details, see this page (in Japanese).

Hankyu Railway keeps items for up to three days; umbrellas are kept for two weeks then discarded. See here for details (in Japanese).

Inquire at the nearest Hanshin station on the same day property was lost; after that, contact the Lost and Found Center at Hanshin Umeda Station’s West Gate.

Kintetsu Railway keeps items for up to seven days before transfer to police; umbrellas are kept for two weeks then discarded. See this page for details (in Japanese).

Keihan Railway keeps items for up to three days before transfer to police; umbrellas are kept for two weeks then discarded. See this page for details (in Japanese).

Nankai does not have a centralized number for lost property. Contact staff at the nearest Nankai station. For Namba Station, call 06-6631-1351 (Japanese only).

JR Kyushu doesn’t have a central contact point for lost property. Report your loss at JR Kyushu stations including Hakata, Nagasaki and Kagoshima-Chuo.

Call Toei to ask about lost property; dial 1 to be connected to an English speaker.

Be sure to contact Keio as soon as possible as it will hand over lost property to police three days after it’s found. The Keio lost and found office is near Meidaimae Station. See here for details.

Contact Tokyu to ask where to go to retrieve your property. English-speaking staff are available. 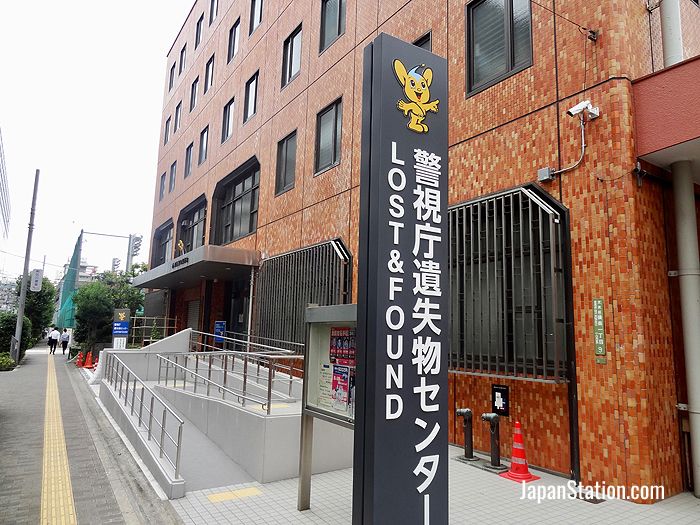 Article and original photos by Tim Hornyak. All rights reserved.