Although Christmas in Japan is not an official holiday, or celebrated as a religious event, Japanese people do seem to enjoy the festive mood. In the weeks leading up to Christmas decorative illuminations are everywhere, and all the stores are playing Yuletide tunes.

Japan has also developed its own unique set of popular Christmas traditions. Christmas Eve, for example, is seen as a special night for romantic dinner dates. Fried chicken is considered a traditional Christmas food and is an essential element of any Christmas party. And Japanese Christmas Cake comes in the form of a light strawberry sponge cake with lots of whipped cream. Christmas Trains have also become a popular element of the winter season and many railway companies up and down Japan offer some form of festive ride in the weeks before Christmas. Here are seven of the best Christmas Trains available this season.

Yuri-Kogen Railway are running a Christmas Train between December 15th and 25th. This is a popular train with small children. The train decked out with sparkling illuminations will run between Ugo-Honjo Station and Yashima Station on the Chokai Sanroku Line. This Christmas train runs only in the morning on weekdays, but also runs in the afternoon on weekends.

A special Christmas event will be held on the train on the following days: 15th (Saturday), 16th (Sunday), 23rd (Saturday), 24th(Sunday) and 25th (Monday). On these days children can take part in a handicraft-making event and Santa will appear to give out presents. Parents who wish to reserve presents for their children should make a booking in advance. The fee for a present is 500 yen. For more details see the official webpage (Japanese)
To reserve a present for your child call 0184-56-2736 (Japanese)

Seibu Railway’s “52 Seats of Happiness” restaurant train will run as a Christmas Train on the 22nd, 23rd and 24th of this month. On route passengers will be treated to live Christmas music, a delicious gourmet meal, and a stop at Seibuen Amusement Park. Both a “brunch course” trip and “dinner course” trip are available.

The full fee including the meal is 14,000 for brunch and 17,500 for dinner.
Bookings can be made online at this webpage: https://shifuku.seibu-group.co.jp/
For more details download this year’s PDF brochure.

Toden Arakawa Tramline are running a specially decorated Christmas vintage trolley-car every day this December until the 25th. The trolley-car runs the regular route between Minowabashi and Waseda and costs the regular fare. 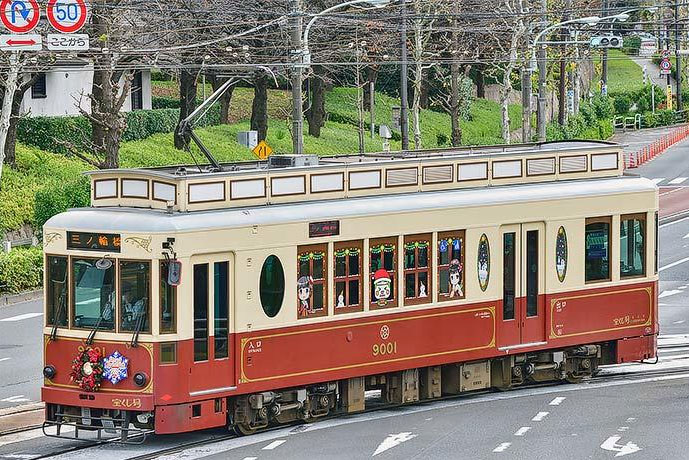 Oigawa Railway are running a Thomas the Tank Engine Christmas Steam Train on the 15th, 16th, 17th, 21st, 22nd, 23rd, 24th and 25th of December. The train will run between Shin-Kanaya Station and Senzu Station on the Oigawa Main Line.

Sanriku Railway will run a Christmas Party Train on December 21st. This decorated retro train will make a return trip between Miyako Station and Tanohata Station on the Kita-Riasu Line. Beer, sparkling wine, sake, and non-alcoholic beverages will be served on board together with a range of treats, snacks, and Christmas Cake. Entertainment will be provided with juggling, balloon art, and a game with prizes. 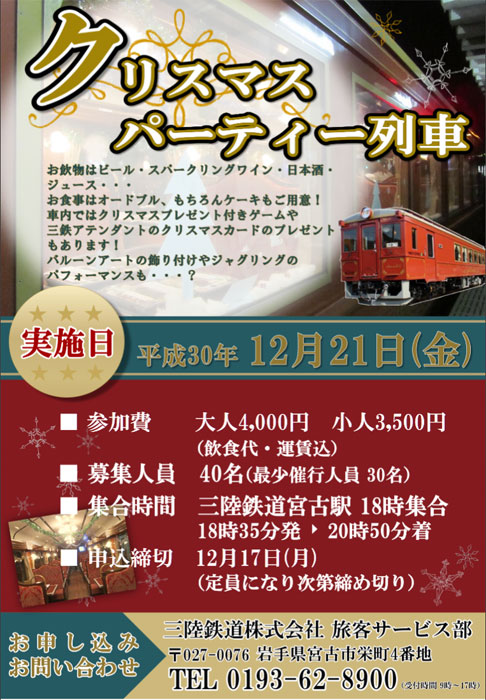 Yamagata Railway are running a Christmas Wine Train on the Flower Nagai Line on December 15th and 16th. Passengers will be treated to wine from five different local wineries, take part in a rock, paper, scissors tournament for prizes, and enjoy a cheerful commentary in the local Yamagata dialect. On the 15th hot bowls of sukiyaki will be served, and on the 16th a special bento box lunch will be prepared. 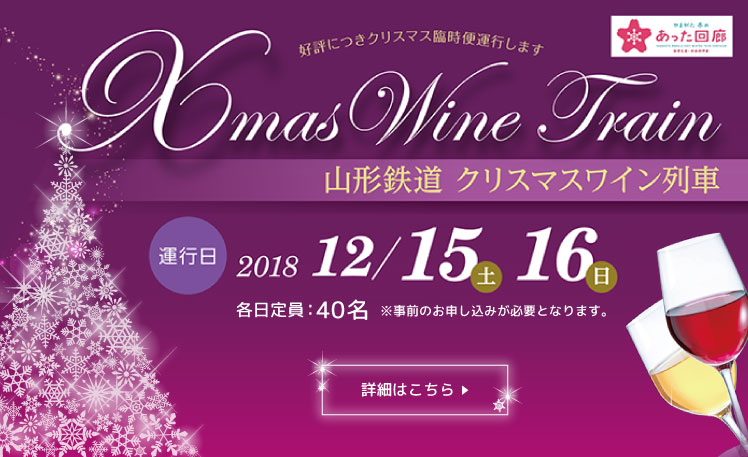 The fee for participating in this event is 4,980 yen. This train should be booked 3 days in advance. See the official webpage for more details (Japanese) To book the train call 0238-88-2002 (Japanese)

Kobe Electric Railway (also called Shintetsu) are running a specially decorated Christmas Train every day this December until the 25th. 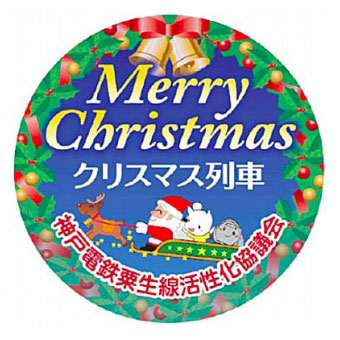 On the 16th of this month a special “Happy Christmas” event for children with songs, sweets, and presents from Santa will be held on board the following trains: