Metropolitan Intercity Railway Company is introducing new multilingual ticket machines at all 20 stations on the Tsukuba Express railway line. The Tsukuba Express (also called TX) is a high speed railway linking Tokyo’s famous “electric town” of Akihabara with the science and research city of Tsukuba in Ibaraki. The TX, which first opened in 2005, cut down travel time between Akihabara and Tsukuba to just 45 minutes from a previous 90 minute journey along the JR Joban Line.

Now almost 12 years have passed since the line opened and station machinery is in need of an upgrade. The TX line has also seen an increase in overseas passengers in recent years and so new multilingual ticket machines, and fare adjustment machines are being installed in all stations. Previously these machines had just two language options: Japanese and English. However the new machines will have a total of 7 language options including French, Spanish, Korean, traditional Chinese, and simplified Chinese. 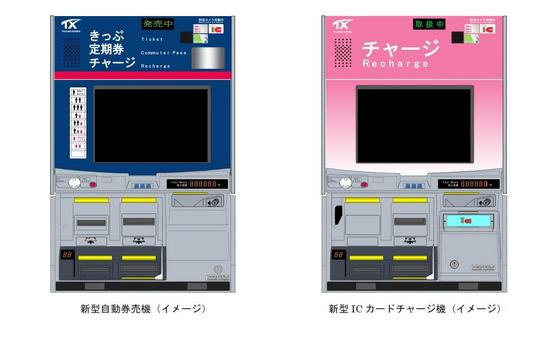 As rechargeable IC cards such as Pasmo and Suica are increasing in popularity, new IC card charge machines will also be added along the TX route. Altogether 55 ticket machines, 27 fare adjustment machines, and 14 new IC card charge machines are being installed along the route. Installation of the new machines in the TX “concept colors” of pink and blue is already underway and is due to be completed by the end of March this year.

For more information on the Tsukuba Express please visit the official site: http://www.mir.co.jp/en/